Pretty much every single person who ends up going to university/college ends up complaining about the cost of their education, and how it isn’t justifiable, how they have to pay additional charges for things such as printing when they’re already paying £9,000+ a year to be there, how their tutors never show up and so on. Basically, there’s a lot of complaints about having to pay for it. 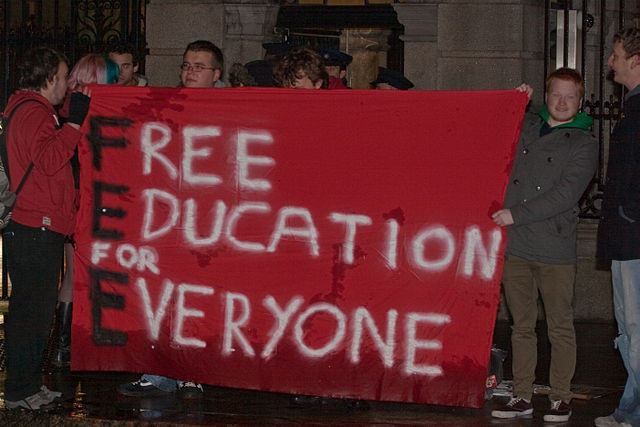 So what would the dream be? Free education, of course! No need to take out excessive student loans, beg for grants, have your parents income judged to decide on how much money you should receive. Just having it all for free. It would be great, wouldn’t it?

Well actually… you would probably end up worse off with free education than if you did have to pay for it!  It sounds highly unlikely but it’s actually true. Let’s start off by looking at the cancellation of university fees. In a perfect world, you would be able to attend university for free, and in some countries, such as Scotland and Sweden, you can. But as a direct result of this, you would actually end up in more debt than someone paying for university due to all the other bulls you would have to pay. We’re taking accommodation fees, living expenses and so on. Now obviously, you have to pay all of these whilst you’re at university right? But the difference with this is that the universities hand out maintenance grants and loans in order to help out students with the living costs. It is almost 100% probable that if university became free, they would no longer hand out grants and loans to assist with things such as accommodation. This would lead to people having to find a way to pay for rent and food and drinking (come on, it is uni after all) by themselves. And in turn, this would end up racking up more debt that you would have to pay off almost straight away, unlike a student loan that you pay back in small amounts over time once you’re in a job with a certain wage.

The Bank of Mum and Dad

So what else does this mean? Well, a lack of independence. If university was free, and therefore students couldn’t afford the living costs, then far less of them would move away from home. Most would pick universities closer to home in order to be able to still live at home whilst attending university. Now, most people know that university is the ‘best life lesson’ you can have, you learn to be an adult, learn to fend for yourself and do all the important things in life, like change a lightbulb or divide your whites from your colours in the wash. Chances are, if people stayed at home rather than moving out, they wouldn’t have to learn these lessons, and so in turn our generation of young people would become more dependant on adults than ever before…and this is pretty backwards.

Lastly, you’ve got to think about the taxes! It’s all well and good university being free, but then who is going to pay for it? Because if it’s free, you’re still using resources – using books, work sheets, electricity, wifi. You’re still being taught by someone – who is paying them? If you’re not paying university fees to cover these costs, you can be sure that the money is only going to come from one other place…taxes. The whole country (including fresh-out-of-uni students themselves) will have to fork out excessive amounts, to cover the cost of university.